The phemenon of cell’s migration is the main process during the development and life of multicellular organisms. It can be observed during tissue development in the time of embryogenesis, during wound healing or immune response. The application uses advanced image analysis methods to interpret the movements of cells in order to discover behavioural and shape changes. Such analysis simplifies understanding of mechanisms causing these changes. 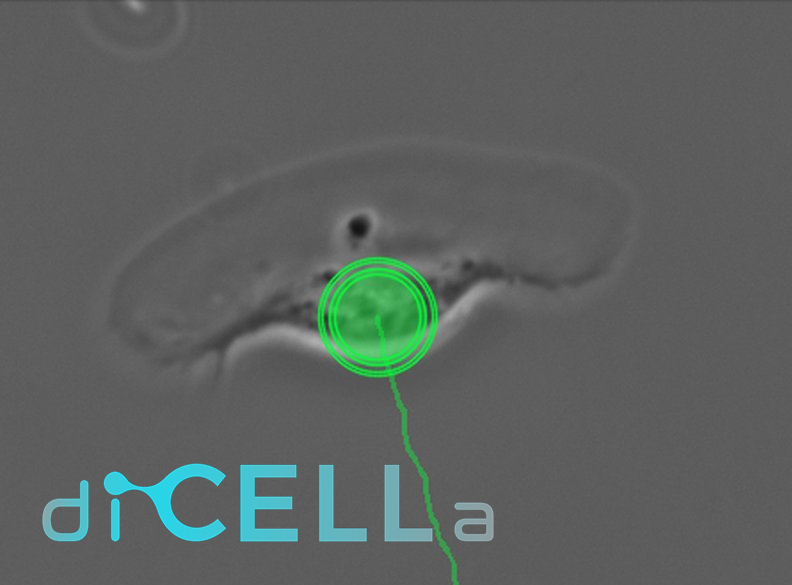 Application will be available soon at diCELLa Image Service

diCELLa cellMIGRATION is an application that allows you to quickly analyze results from your experiment. Given only unmodified images/video our algorithm provides you with a number of useful information.

Our solution is fast, automatic, reliable and most of all helps you avoid time-consuming and not always ideal manual counting.

How to use it?

To use the diCELLa cellMIGRATION you need to upload a number of images (max. size 7MB per image) in any image format (also video).

Results are available to download in pdf or txt format just few seconds after running the experiment in Image Service. They consist of a parameters set describing the migration’s activity, the persistence of movement, the directionality of movement and more useful data..

Create an account on our Image Service platform, buy dicellons and exchange them to upload your images.

If you want to use your results in a scientific paper or during a speech at a scientific conference, contact us to get a discount!

The phemenon of cell’s migration can be observed in the physiological processes such as morphogenesis, cell’s differentiation, wound healing, angiogenesis, inflammation, tissue’s immunity and regeneration likewise it is a crucial phenomenon in the creation of tumour metastases. Moreover, it is a visible occurrence in rheumatoid arthritis and atherosclerosis. It is used video microscopy to analyze these phenomena in the laboratory conditions. This has become common with the arrival of the ‘80s when it was popular to use video signal recorders in order to analyze computer images.

These techniques in relation to the migration base on the change of cell’s positions during the experiment. Our solution, thanks to the usage of the neural network, allows to track cells and determine parameters, which are using in the laboratory practice based on the handmade marking [1].

These are the following indicators determined automatically by our algorithm:

From the obtained data can be checked whether the statistic importance exists for individual metric between cells for their distributions, which they are steaming from computed parameters. For different physiological process and distinct groups of cells is observed other types of cells' shifts.

There are four ways in which animals’ cells move:

The ameboid or mesenchymal movements and gliding motion are the methods of dislocation of individual cells while the collective is determined for a group of cells [4], [5].

The amoeboid movement of the cell resembles the way in which the protists like Amoeba proteus or Acanthamoeba castellanii move. Significant deformation of the cell body occurs with the occurrence of spherical protrusions of the cell membrane during migration. It can be recognized in an organism for cancer cells, thus providing them with a rapid rate of movement mainly due to their plasticity and changes in the polarization of the cell membrane. This movement is also observable for leukocytes. The driving force for this type of movement is the so-called contractile force.

Another type of movement is mesenchymal, and it is characteristic of keratinocytes and fibroblasts. Cancer cells that move in this way steam from connective tissue (e.g. sarcoma) or epithelial (e.g. colon cancer). This movement is to produce a leading edge of the so-called lamellipodium by the cell which gives the direction of migration. The initiation of this movement takes place by growth factors like EGF, successively producing lamellipodium and rapid actin polymerization [5]. The collective movement is extremely important in maintaining homeostasis in higher organisms. It is noticeable in the migration of epithelial fragments on flat surfaces such as the intestinal mucosa, displacement of keratinocytes and fibroblasts towards the wound site or the movement of cells in the organogenesis [3], [5].

On the contrary, the least studied migration’s method is gliding motion. In this way are moving parasites in the human body: Plasmodium, Toxoplasma and Cryptosporidium. The cells, which are displacing in such a way, possess the visible lamellipodium. During their movement is impossible to differentiate the distinct stage [6], [7].